(CNN) A snowfall in northern Ohio inspired a cancer patient’s daughter to write a message to her mom in the fresh snow outside her hospital room.

Michele Schambach, 65, arrived at the Cleveland Clinic from Guatemala on Wednesday hoping for more advanced treatment for her aggressive brain cancer. This was her second time in the United States for treatment, after coming to the non-profit hospital for care in October.
Her daughter, Marie Schambach, a physician in Guatemala, told CNN she had never seen snow before, but decided that she could use it to lift her mom’s spirits.
“I looked out the window and saw a big blank slate, and thought I could write something on it,” she said.
Schambach walked by the space on her way back to her hotel on Thursday night and tried to dig out the words, but because it was still snowing, it wasn’t working out.
On Friday, she tried again. This time, her message — “MOM BE BRAVE” — clearly stood out in the white powder. Her mom could see it from her room window.
“I told my dad, “Wake my mom! Tell her to go to the window,” Marie said. “She was happy, so, so happy.”
Schambach was hoping other patients would see the message and feel like “somebody else cares.” 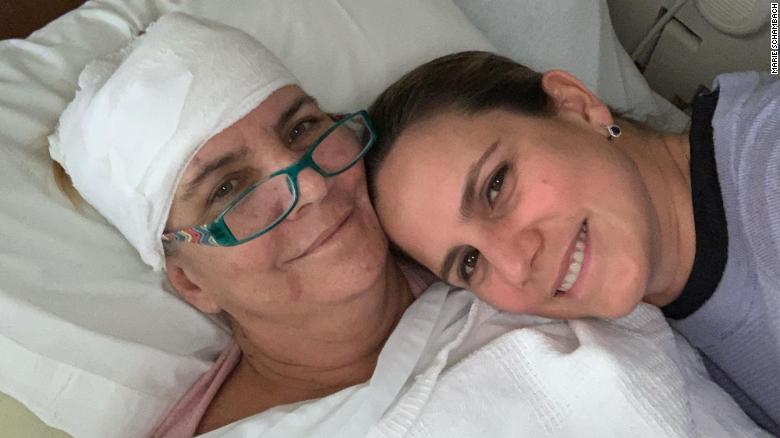 Michelle Schambach and her daughter Marie.

The Cleveland Clinic tweeted a photograph of the message with the caption, “A beautiful message was left at our main campus today. To the person who wrote it, you’ve touched our hearts. #MomBeBrave.”
Schambach said messages for her mother began pouring in after the clinic posted the photo. Her mother is a former teacher and students that she taught 30 years ago in Latin America reached out to tell her they were thinking of her.
“So happy to have so many people praying for my mom. It makes her smile,” Schambach said.
As a physician, Schambach said she believes that others bringing joy can help her mom’s body heal faster.
In fact, on Saturday, they got the good news that her mother’s white blood cells were up. The doctor said the medicine being used to treat the cancer was kicking in, but Schambach had another theory.
“The medicine helps, but it’s from a lot of support and a lot of prayer.”