On Sunday April 26, 2020, at approximately 8:05am, a party of Police Officers was dispatched on duty to execute a search warrant at the home of one Gleason Lewis in Campden Park.

According to a police report, while the officers were at Lewis’ home performing their duty, he (Lewis) opened fire, killing Sergeant 209 Philbert Chambers, who was attached to the Questelles Police Station. 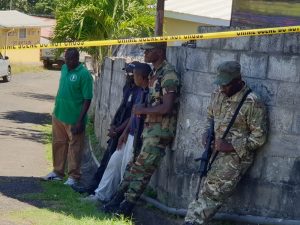 Photo from the scene

Police Constable 700 Verrol Sam was also wounded in the process.

Both men died at the scene. The police have informed that a coroner’s inquest will be conducted into this matter.

Chambers, said to have been in his late 20’s, has been described as a well known and respected individual in the  South Leeward constituency and beyond. He was the coordinator of the Questelles Police Youth Club.

Photo from the scene

Commissioner of Police, Mr. Colin John and members of the Royal St. Vincent and the Grenadines Police (RSVGPF) have extended condolences to the immediate families and friends of both, Sergeant Chambers and Mr. Lewis.

Speaking on the incident, Mr. John said, “this is a very sad and painful time for both families and the entire Police Force. We ask for your prayers and support at time.”